The Property is located in Ontario, 110 km southwest of the city of Timmins, on the eastern side of Raney Lake. The Property is accessible by highway and secondary roads (Figure 4-1). 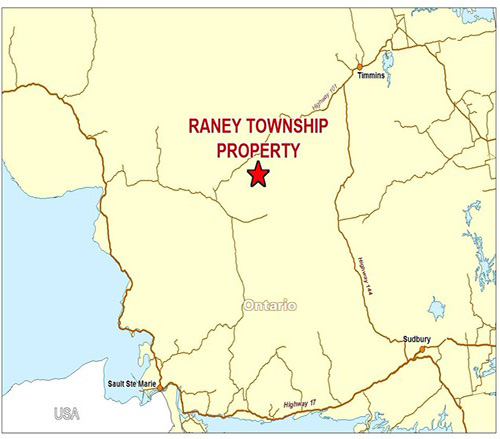 History of the Property

Early exploration in the area is documented from 1932 onwards, and consisted of at least five previous exploration campaigns by companies and prospectors. The Property is part of the Swayze area, which is one of Ontario's historic gold areas and has seen prospecting activities for a variety of metals. Although there are no significant precious or base metal producers in the immediate area at the present time, there are numerous recent discoveries of gold mineralization within the belt supporting the fact that the district has a rich mineral endowment typical of the Abitibi Orogenic Belt. The only documented past producing gold mine in the Swayze greenstone belt is the Jerome Mine, located southeast of the Property in Osway Township. There are numerous occurrences close to the Property that are undeveloped prospects, with no known reserves. Newmont Goldcorp opened the Borden Mine located ~35 kilometres to the west in 2019.

The earliest documented exploration on the Property was by the Raney Lake Prospecting Syndicate in 1932. A group of 35 claims northeast of Raney Lake was staked, prospected and explored by selective trenching and sampling. Two high-grade (l opt Au) gold-bearing quartz veins were discovered and exposed during this program. The first quartz vein, the “No. 1 showing” was striking easterly and dipping steeply north, and was traced for 100 feet with a maximum width of 2 feet. Host rocks were indicated as arkose and/or impure quartzite. The vein contained minor pyrite and carbonate, native gold was noted in one spot. A second quartz vein, the “No. 2 showing”, was exposed 500 feet southwest of the No. 1 showing. It strikes N60E, was exposed continuously for 100 feet, and averaged 6 inches in width. Host rocks were feldspar porphyry which contained trace pyrite, chalcopyrite, and galena. Native gold was observed in one place. These two veins were originally referred to as the “Thorne-Greaves gold showing” (Furse, 1932).

In 1972, J-Dex Exploration Limited staked 4 claims containing the two gold-bearing veins. Most of the property they worked is south of the present day Raney Property, near the north shore of Denyes Lake. The claims lapsed, but were later staked in 1978 by D.O. Baker. One Winkie drill hole, with a length of 66 m (218 feet), was drilled in the vicinity of the No. l showing (Baker, 1979). The location of this hole is uncertain and no assay results are available.

J-Dex Mining and Exploration acquired claims over the gold showings in 1978, and performed geophysics consisting of a magnetometer and VLF-EM survey. This was followed up with geological mapping and sampling (Caira and Coster, 1984). Assays up to 34.0 g/t Au were reported from the surface sampling. In 1984 a limited Winkie drilling program was completed, totaling 11 drill holes for 615 m (2,017 feet). Seven holes were positioned at three collar locations to test the No. l gold showing. These holes generally cut the vein zone at very shallow depths. Intersections included 4.79 m of 2.16 g/t Au and 2.36 m of 1.21 g/t Au. Four holes were positioned at a single collar location to investigate VLF-EM anomalies located to the northwest of the vein (Caira, 1984). The No. 2 gold showing was not tested during this program.

In 1986 J-Dex Mining and Exploration formed a joint venture with Goldrock Resources and Glen Auden Resources, and they extended the original J-DEX claims to a 72 claim property. Induced Polarization, magnetic, VLF-EM and lithogeochemical surveys were completed over 15 km of grid covering a portion of the present property (Hodges, 1986). The surveying did not include the swampy area immediately to the east of the No l showing.

In 1988 a drilling program was performed to test the IP anomalies, as well as some magnetic anomalies and structures associated with the No. 2 gold showing. A total of thirteen Winkie holes were completed, totaling 375.82 m (1233 feet). Many of the planned targets were never intersected and thus untested. Assay values were not submitted for the drill core samples. The No. l gold showing was not tested in this program (MPH Consulting, 1993).

In 1991 a prospector staked several claims which form part of the current property. The prospectors cleaned out the old trenches over the No. 1 and No. 2 showings, performed sampling of these showings, and completed geological mapping (Salo, 1992). Assays were not reported.

In 1993 Cree Lake Resources Corp. optioned the property and carried out a program of geological mapping, rock sampling and till sampling over a larger group of claims which included most of the present day property. Rock sampling confirmed previously indicated values. A soil geochemistry survey outlined a broad zone of weakly anomalous gold-in-soils over the No. 2 gold showing. The soil program did indicate the No. 2 gold showing had the possibility of some strike extension. The geochemical anomaly over this showing is coincident with IP chargeability anomalies defined during previous exploration and is largely untested (MPH Consulting, 1993). A compilation program by Cree Lake Resources interpreted a gold-bearing alteration envelope surrounding the No. l auriferous quartz vein, and suggested the vein zone was increasing in intensity and potential to the east. Recommendations for a drilling program to test both gold showings were made, however the company did not have the funds to implement the program and no further work was recorded by Cree Lake Resources. In 1993, Induced Polarization surveys were reported to have been completed over portions of the current property, the data has not been located in assessment files.

In 1999 Joe-Anne Salo and William Brereton completed one drill hole on the property; this program was funded by the Ontario Prospectors Assistance Program (OPAP). A total of 251 m (823ft) was drilled on the projected east extension of the historic No. l gold showing. Two zones of irregular quartz-carbonate flooding, patches and veinlets with minor disseminated pyrite were intersected from 127 to 134 m and 148 to 159.5 m. The upper zone returned assay results of 2.50 g/t Au over 1.0 m, while the lower zone assayed 3.37 g/t Au over 6.8 m (Brereton, W., 1999). During this same period of work limited stripping work was carried out over the No. 2 showing. A strong, wide (100 m) shear zone was mapped with white weathered feldspar porphyritic rocks. Systematic sampling was not carried out at this time, further drilling was recommended.

In 2005 Wallbridge Mining Company Ltd. evaluated the property, they compiled previous work and re-logged and sampled the 1999 drill hole. The best assay returned from this sampling was 3.85 g/t Au over 5.9 m within the lower gold zone or No. 2 showing (Oosterman, 2005).

Table 6-1 lists previous drill holes on the property that contained significant results recorded in the assessment files. Note that most of the holes are very shallow in depth.

MPH Ventures conducted trenching and sampling, Induced Polarization (IP) surveys, followed by drilling over the Property during the winter of 2009 and 2010. This phase of exploration is discussed below in further detail. 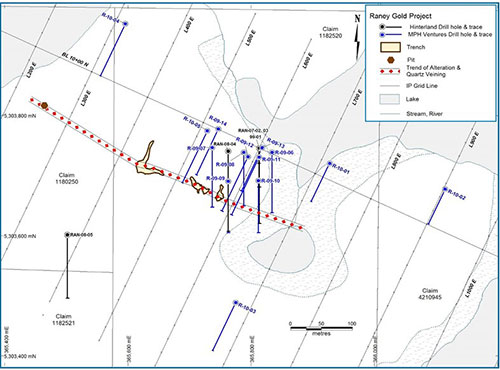 Nine holes were completed in 2009 in three phases by MPH Ventures to follow up on gold-bearing drill intersections in holes 99-01, RAN-08-03, and RAN-08-04. Table 10-3 documents the drill collar locations, their lengths, dips, and azimuths. Figure 10-1 shows a plan of all the drill holes, and their relation to the trenching, grid, and the sheared and altered zone exposed in the recent stripping program.

During the next phase of drilling a larger grid was cut, oriented perpendicular to the known mineralization, such that the zone would be intersected perpendicular to the strike direction of mineralization, alteration, and shearing. Four holes (R-09-11 to R-09-14) were completed, testing the down dip continuity of the alteration zone.   Significant gold mineralization was intersected in three of the four holes, and it is important to note that each hole intersected multiple alteration zones which contained mineralization. This recognition of multiple zones and better grades is thought to be a result of drilling the zones perpendicular to their strike and dips. The best intersection was in hole R-09-011 consisting of 3.73 g/t Au over 4.0 m. Table 10-4 outlines the better mineralized intersections. Drill hole R-09-14 intersected 1.43 g/t Au over 2.25 m, and this hole extended the known mineralization 100 m west of the original discovery (Figure 10-2). Several sections follow which demonstrate the results of the 2007-2008 Hinterland drilling and the 2009 MPH drilling. Section 5+50 E (Figure 10-2) shows the mineralized zone intersected in holes R-09-07 and R-09-14. This zone is very steeply dipping. Section 6+00 E (Figure 10-3) cuts through the main mineralized showing, and demonstrates that at least two and possibly three parallel mineralized zones are present. Section 6+50 E (Figure 10-4) extends the mineralized zones to the east. 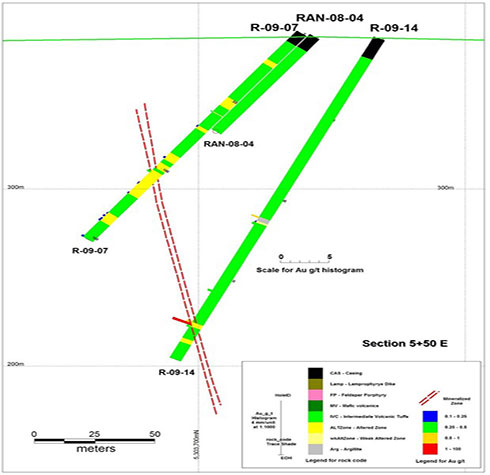 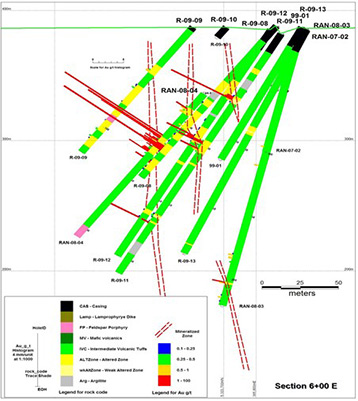 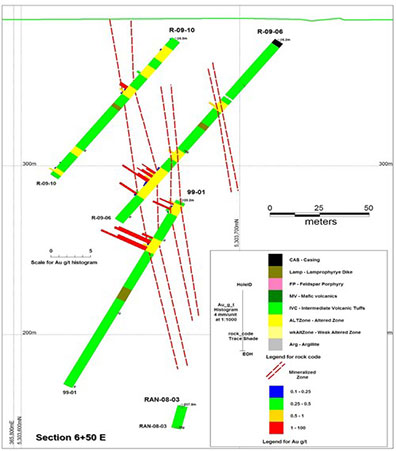 The ground IP survey results were used to plan the drilling in 2010.  This drilling was designed to test the east and west extensions of the sheared alteration zone and to evaluate the geophysical anomalies. Five holes were completed, totaling 645 m.

Hole R-10-01 was planned to test the extension of the Raney gold structure 100 metres east of the previous drilling, and to test an IP anomaly outlined on L7+00 E. This hole intersected numerous gold intercepts over narrow widths including 18.85 g/t Au over 0.40 metres, 7.08 g/t Au over 0.75 metres, 3.67 g/t Au over 1.0 metre, and 2.85 g/t Au over 1.0 metre. The drilling confirms the eastward continuity of the structure. The other four holes did not intersect significant gold mineralization but sufficiently explained the geophysical anomalies. Hole R-10-05 tested the west extension of the mineralization, and intersected narrow anomalous gold assays. The best intersection was 0.61 g/t Au over 1.0 m. This hole had several narrow intercepts of anomalous gold, and may suggest the zone has narrow gold-enriched shoots.  The structure is not fully explained, and further work is needed to test its extents. Table 10-4 outlines the significant intersections. Figure 10-5 shows the results from hole R-10-05 (Section 5+00 E); while Figure 10-6 is the same section superimposed on the IP section and demonstrates that the drill hole did not adequately test the IP anomaly.  The gold mineralization may expand up-dip of hole R-10-05. Figure 10-7 of Section 7+00 E indicates that the gold mineralization is still strong to the east, and needs to be tested at depth in this area, as well as eastward.

See the technical report prepared by Todd Keast, P. Geo., for further details on the Property.

Todd Keast, P. Geo., carried out an independent review of the Raney Township Gold Property (the ‘Property’), in northern Ontario. The author conducted a site visit, reviewed available exploration results and prepared this independent technical report (the ‘Report’) in accordance with the requirements of National Instrument 43-101 (‘NI 43-101’) and Form 43-101F1 (Standards of Disclosure for Mineral Properties) to be a comprehensive review of the exploration activities on the property, and, if warranted, to provide recommendations for future work. For the purposes of NI 43-101, the Property is considered an early-stage exploration property. 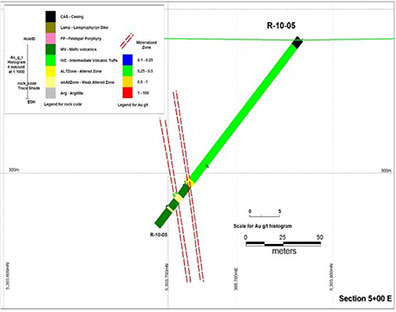 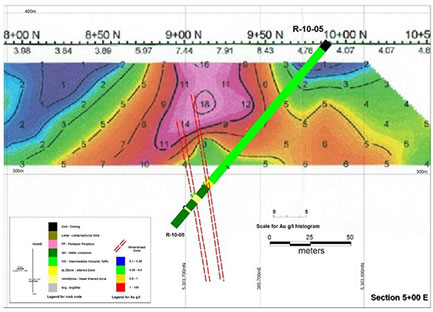 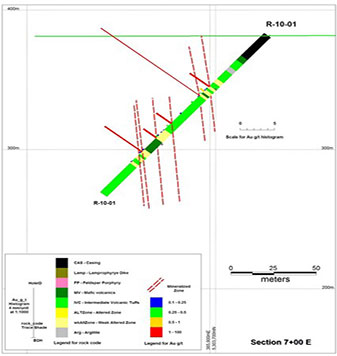